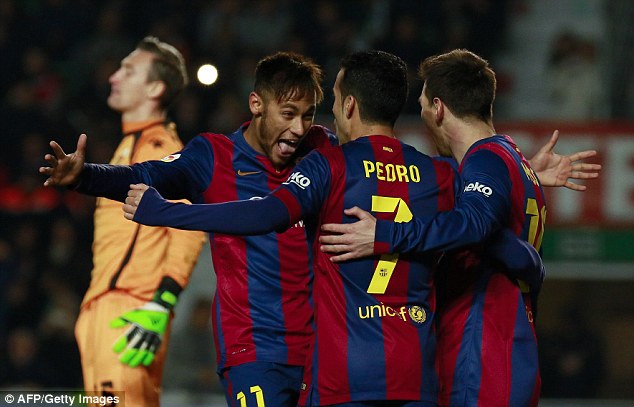 Barcelona are having their way with Elche on Saturday, after their rivals Real Madrid struggled through a clash with Cordoba that saw Cristiano Ronaldo get sent off with a red card.

Thanks to goals from some of their biggest names, like Gerard Pique, Lionel Messi and Neymar, Barcelona took a 3-0 lead. Late int he second half, Neymar scored his second goal of the game to extend the lead to a dominant 4-0, and this was no routine goal.

Barcelona’s first goal scored by Pique in the 35 minute from an astute move by Xavi, changed the game completely. From that point on, Barca were able to build on that lead comfortably. The many goals that followed were a clear reflection of the vast difference in terms of budget and quality between both clubs.

The Catalan club’s third consecutive victory in the domestic league helps them keep the pressure firmly on current leaders Real Madrid. While the difference is still one point despite Los Blancos having played one fewer game, Barcelona’s fans hope that their team’s current streak will help them climb to the top of the table sooner rather than later.

Lionel Messi scored the late winner as Barcelona defeatedAtletico Madrid 1-0 on Wednesday in the first leg of their Copadel Rey quarter-final.

Following a scoreless first half, Atletico seemed set to hold on for a creditable draw at the Nou Camp. But with seven minutes remaining, Sergio Busquets won a penalty that led to Barca‘s winner.Messi missed the spot-kick but slotted in the rebound in the 85th minute to give Barca a slim advantage heading into the second leg.

Barcelona, who secured their last-eight place with a 9-0 aggregate victory over Elche, started the Nou Camp clash with all-star triumvirate Messi, Neymar and Luis Suarez, but were thwarted for long periods by Diego Simeone’s Spanish league champions.

Those in the crowd were treated to a fiercely contested cup tie, with tackles flying, but despite the commitment the deadlock could not be broken until five minutes from time as Atletico, who knocked holders Real Madrid out in the previous round, defended resolutely.

Messi smashed a free-kick against the Atletico wall and, as the visitors attempted to clear, Sergio Busquets was fouled in the area and referee Jose Gonzalez pointed to the penalty spot.

Messi’s low spot-kick was parried away goalkeeper Jan Oblak, but the Slovenian could only watch helplessly as Barcelona’s talisman poked home the rebound.

The 85th-minute goal gives Barcelona a slender lead going into next Wednesday’s second-leg encounter at the Vicente Calderon stadium.

Barcelona veteran Xavi says a footballer has no right to be in the game if he cannot find a way to link up with the brilliance of Lionel Messi.

“ If you can’t link up well with Messi, football may be the wrong sport for you. ”

“ Who would I sign? Silva, Cazorla…There’s a lot of quality players in Spanish football that Barcelona could sign. ”

The Argentine ace put some of the speculation over his future firmly behind him with a virtuoso performance for the Catalans against Deportivo La Coruna at the weekend, as he scored a sublime hat-trick in a 4-0 victory.

Xavi’s midfield team-mate Ivan Rakitic linked up superbly with Messi during the clash at the Riazor and, when asked about his own experience of playing alongside the Argentine, he claims it is easy to do so.

“ If you can’t link up well with Messi, football’s not for you. ” he was quoted as saying by Marca.

Xavi went on to describe the late Luis Aragones as one of the most important figures in his distinguished career, with Spain’s tiki-taka style at Euro 2008 borne out of the former Roja coach’s ideals.

“ I’ve learned from all of them [coaches], but it’s true that Luis Aragones left a huge mark on me personally. ” Xavi added.

As well as missing Sunday’s trip to A Deportivo La Coruna, Xavi sat out the La Liga win at the Calderon and both legs of the Copa del Rey last-16 thrashing of Elche because of a calf problem. He is currently training normally and hopes to be passed fit to face Atletico Paranaense  in the cup on Wednesday.